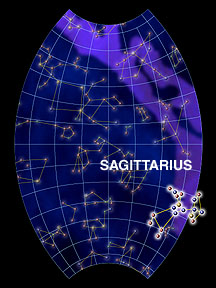 Sagittarius is a centaur, with the torso of a man atop the body of a horse. Unlike the wise and peaceful centaur Chiron (Centaurus), Sagittarius is aiming his giant bow at his neighbor, Scorpius. While this is a very large constellation, its stars are relatively faint and most people easily recognize just the central asterism which resembles a teapot with a lid, handle, and spout.

Looking into Sagittarius, you are looking directly at the center of our Galaxy through its disk, and many varieties of astronomical treasures can be found there. More than a dozen Messier objects reside in Sagittarius, including globular clusters M69, M70, and M54 which lie along the bottom of the teapot. Recently, astronomers have discovered a small galaxy in Sagittarius that is crashing through the Milky Way.