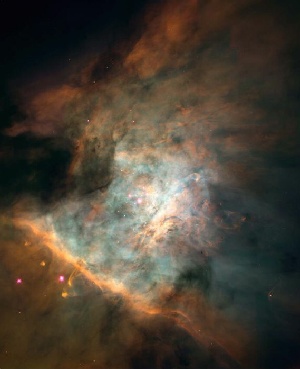 Hidden in the sword of Orion the hunter, a weapon and symbol of death, lies the birthplace of new stars - the stunning Orion Nebula, one of the many objects catalogued by Charles Messier in the 18th century during his hunt for comets. Messier noted the position of the nebula because he didn't want to mistake it for a comet. Too bad he didn't notice the spectacular event taking place in the nebula, which he named M42. Nestled in the center of M42 is a group of stars, known as the Trapezium, which have formed from the gas in the nebula.

The stars of the Trapezium are young blue stars. It is their energy which makes the nebula glow. The Orion nebula is more or less circular in shape, and it glows with a characteristic red color. All HII regions have this color. There are many HII regions with young stars in the disk of our Galaxy.