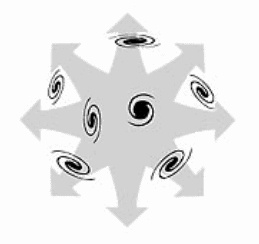 In the 1920's the famous American astronomer Edwin Hubble made a startling discovery that forever changed our view of the Universe. He found that, no matter which direction he looked into space, distant galaxies appeared to be moving away from us. The farther away the galaxy is from our galaxy the faster its recession speed. What could be causing this curious effect? Does our galaxy smell bad? Not at all. In fact, Hubble was observing the expansion of the Universe.

An expanding universe was actually predicted by Albert Einstein's theory of general relativity. But Einstein believed that the Universe should be static because that was more perfect, and many people agreed. But when Hubble made his discovery they were all forced to accept the reality that we live in an expanding universe.

What does it mean that the Universe is expanding? Well, a simple way to think of it is to imagine baking a loaf of raisin bread. As the bread rises it also expands. All of the raisins move farther apart from one another. Every single raisin would see all of the others moving away from it. So to complete the analogy, all of the galaxies in the universe are like the raisins in the bread.

But of course the analogy is not quite complete. Raisin bread has only 3 dimensions: height, width, and depth. However, the Universe has 4 dimensions: height, width, depth, and time. They are bound together in what is known as spacetime. The universe is not only expanding in space but also in time. However, it is really difficult to visualize 4-dimensional raisin bread, so don't try, it'll just hurt your brain.

Some of the best news of the week is that the Microwave Anisotropy Probe (MAP) was launched successfully last Saturday! Liftoff on its Delta II rocket occurred on time at 15:46:46 EDT, June 30, 2001. So...more