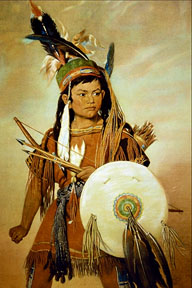 This painting by George Catlin shows a young Native American boy. His ancestors were the first skywatchers of North America.
Click on image for full size
Image courtesy Corel Photography

Bernabe Cobo said in 1653 that there are, "no people, no matter how barbaric and primitive, that do not raise up their eyes, take note, and observe with some care and admiration the continuous and uniform course of the heavenly bodies." It does seem reasonable that even the earliest man would have had a consciousness of the sky. Long before farming, man would have watched the cycle of the Sun because it seemed to coincide with cycles of vegetation that was gathered and the location of animals that were hunted. Early man would not have been distracted by t.v., media, city lights or any of the things that keep us from spending our nights gazing up at the black, starry sky. And so, most certainly, the earliest of men were the earliest skywatchers.

And so we can theorize that man was watching the heavens many, many years ago. In 1974, "Lucy" was unearthed at a site in Ethiopia. Lucy was a hominid, an early ancestor of the modern human. She likely lived over 3 million years ago. And so we know that East Africa was a site were the first humans flourished over a million years ago. Man's tentative first appearance in Europe is dated at 1/2 million years ago. And man just kept roaming farther and farther away from its start in Africa and the Middle East areas.

It is thought that Asian hunter-gatherers crossed the Bering Strait into North America while the straight was frozen over. There is so much biological and archeological evidence to support this theory that many people accept it as the way that the Americas came to be populated by humans. As early as 40,000 years ago, humans may have inhabited North America. And at least by 30,000 B.C., people were present in the Yukon. These hunter-gatherers just kept roaming the land perhaps following animals or water sources so that by 12,000 years ago, people were as far south as Argentina! It is estimated that it took about 15,000 years for people to move from Alaska to South America.

It is these people who were the Natives of the Americas. They too watched the sky. It is interesting to look at evidence of that skywatching by looking at the ancient astronomy practiced by the Native Americans of North America, the Maya of Central America and the Inca of South America.