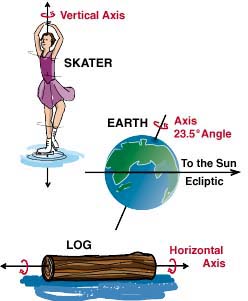 Scientists use fancy words to describe things sometimes. The Earth doesn't orbit the Sun in a perfect circle. So, there is a point when the Earth is closest to the Sun and farthest from the Sun. Scientists...more

Most planets are tilted. Their North and South Poles are not straight up and down. Earth is tilted a medium amount. Uranus is tilted a lot. Mercury is hardly tilted at all. It is tilted less than any other...more