Even though aurora have been seen in the atmosphere of Uranus (which is centered around the magnetic pole as it should be for type-A aurora) Uranus mostly has type-B aurora similar to the SAR ARC of Earth (shown here).

The rings of Uranus extend to 1.95 Ru, exactly where the plasmasphere is supposed to be, and sweep away much of the material there. Therefore there is only a small plasmasphere containing trapped particles, and a lot less plasma can be forced from the magnetosphere down into the atmosphere to create the aurora.

The type-A aurora probably comes from current systems which connect the moon Miranda to the magnetic pole of Uranus, however radio signals, which are thought to arise when the aurora is being created, are very weak at Uranus. This makes reconstruction of the processes which give rise to the aurora difficult.

Thus, from what little we know about the magnetosphere, much of the aurora of Uranus is thought to be created from the diffuse precipitation of particles into the atmosphere, very much like the formation of the terrestrial SAR ARC. These aurora are beautiful but much less dynamic than the type-A aurora found at the poles of the Earth or Jupiter. 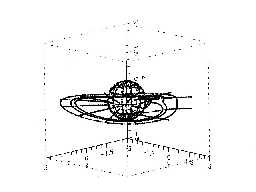