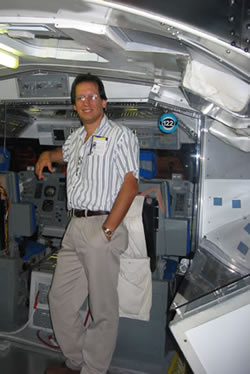 My professional background is in space sciences, education, and electronic engineering. I received my bachelor degrees in my country, Cuba, my Master's in space studies from the National Autonomous University of Mexico (UNAM), and my Ph.D. in space physics also from UNAM, while doing my research at the University of Colorado. My work as a scientist involves the study and modeling of the Earth's ionosphere, especially during perturbed conditions, when the Sun is very active and our planet, under the right conditions, receives part of the energy released during these active periods. I currently work as a Scientist Research with the Cooperative Institute for Environmental Research of the University of Colorado (CIRES-CU), and am affiliated with the Space Environment Center of the National Oceanic and Atmospheric Administration (SEC-NOAA).

I love being with my children David, Victor and Elsa , and with my wife Aymara. Reading, swimming and scuba diving are my favorite activities.