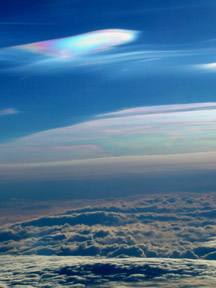 PSCs only form when it is really, really cold. They are mostly seen in the winter near the North or South Pole. They form way high up in the stratosphere where the temperature is colder than -78° C (-108° F). PSCs are about 15 to 25 km (about 9 to 16 miles) above the ground.

We live in the troposphere. There is lots of water vapor in the air in the troposphere. That's why we have lots of clouds here. The clouds are made of tiny water droplets or small ice crystals. The stratosphere is different. It is very dry. There are not many clouds there. Some PSC clouds are made of water ice crystals, like "normal" clouds. Other PSCs have nitric acid and sulfuric acid in them!

PSCs can cause trouble. They help create the ozone hole. The ozone layer protects us from ultraviolet radiation in sunlight.