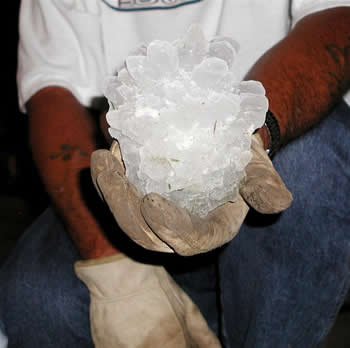 Hail forms in a cumulonimbus cloud from graupel, large frozen raindrops, that are tossed around the cloud by wind. The top of a cumulonimbus cloud reaches high heights in the sky where temperatures are cold enough to freeze water. A hailstone grows larger when supercooled water droplets freeze on contact with a hailstone. The longer a hailstone stays within a cloud the larger it becomes. When its too heavy it will fall to the ground. Some hail reaches the ground as rain because the air below the cloud is warm or because the hail was small when it fell from the cloud.

Most hailstones are about the size of peas. The heaviest one in the United States was the size of a cantaloupe and fell on Coffeyville, Kansas in September of in 1970. In Canada, the largest hailstone measuring 4 inches (10cm) fell on Saskatchewan in August of 1973. The color of hail is either transparent or partially opaque. Hail can fall during violent thunderstorms in the summer. In cumulonimbus clouds, hailstones can grow so large and fall so quickly that warm summer temperatures don't completely melt them before they hit the ground.

Large hailstones can break windows, dent cars, damage roof of homes, and cause damage to crops. One hailstorm can destroy a farmers entire crop in minutes. In the United States, hail causes hundreds of millions of dollars of damage each year.

Radar is important to weather forecasters because it can detect rain and hail. The radar bounces radio waves off water particles in clouds. A computer measures how long it takes for the radio waves to...more