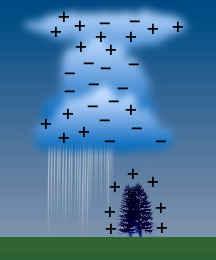 This drawing shows that before lightning strikes, positive and negative particles are mixed throughout the cloud.
Click on image for full size
Image courtesy of Windows to the Universe

Try an Experiment: Create Your Own Lightning

The sky is filled with electric charge. In a calm sky, the positive (+) and negative (-) charges are evenly spaced throughout the atmosphere. Therefore, a calm sky has a neutral charge.

Protons are positively charged, electrons are negatively charged and neutrons have no charge. As you look down at the nucleus, you see that there are the same number of protons below you as there are...more

A stationary front forms when a cold front or warm front stops moving. This happens when two masses of air are pushing against each other but neither is powerful enough to move the other. Winds blowing...more