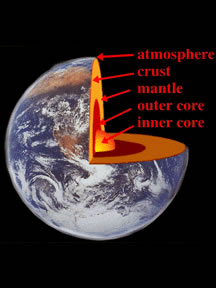 Earth has a diameter of approximately 12,756 km (7,972 mi). The Earth's interior consists of rock and metal. It is made up of four main layers:
1) the inner core: a solid metal core made up of nickel and iron (2440 km diameter)
2) the outer core: a liquid molten core of nickel and iron
3) the mantle: dense and mostly solid silicate rock
4) the crust: thin silicate rock material

The temperature increases rapidly up to 9000 F in the inner core. Therefore, the intense heat from the inner core causes material in the molten outer core and mantle to move around.

The movement of material deep within the Earth may cause large plates made of the crust and upper mantle, called the lithospheric plates, to move slowly over the Earths surface. It is also possible that these currents generate the Earth's magnetic field, called the magnetosphere.

Many kinds of surface features provide evidence of a sliding lithosphere. When two plates move apart, rising material from the mantle pushes the lithosphere aside. Two types of features can form when...more

Earths center, or core, is very hot, about 9000 degrees F. This heat causes molten rock deep within the mantle layer to move. Warm material rises, cools, and eventually sinks down. As the cool material...more 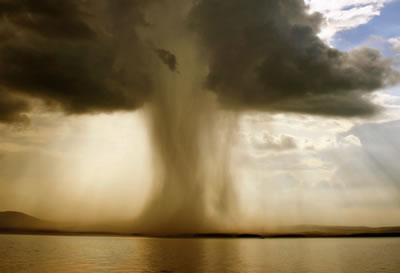