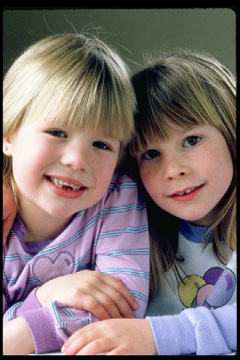 Do you think these sisters look alike?
Click on image for full size
Courtesy of Corel

Can you figure out a family's genotypes by knowing their phenotypes? Click to solve a genetic puzzle!

Learn how gametes are made by meiosis!

You Inherited Your Parents Genes!

Could you actually have the traits from these other people? If you are genetically related to them then yes, you could. Half of your genes are from your mother and half are from your father. But you might look more like one of them than the other. Why is that?

One of those genes wins out and its instructions are carried out. It's called the dominant gene. The other one is still present but its instructions are not carried out. It's called a recessive gene. As a custom, people designate dominant genes with uppercase letters and lowercase genes with lowercase letters. For example gene "A" is dominant and gene "a" is recessive.

The genes of an individual are called its genotype. They determine what it will look like, which is called its phenotype!

Meiosis: How Gametes Are Made

Plants, animals and many other species within the domain Eukaryota are able to make offspring, or young, by sexual reproduction. Their offspring are made from gametes. Gametes are special cells that have...more