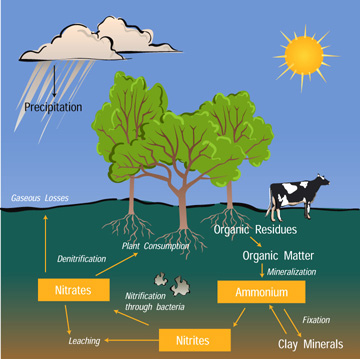 This illustration shows the general pathways of nitrogen through the biological and physical components of the Earth system.
Click on image for full size
NCAR

Nitrogen is an element that is found in both the living portion of our planet and the inorganic parts of the Earth system. The nitrogen cycle is one of the biogeochemical cycles and is very important for ecosystems. Nitrogen moves slowly through the cycle and is stored in reservoirs such as the atmosphere, living organisms, soils, and oceans along its way.

Most of the nitrogen on Earth is in the atmosphere. Approximately 80% of the molecules in Earth's atmosphere are made of two nitrogen atoms bonded together (N2). All plants and animals need nitrogen to make amino acids, proteins and DNA, but the nitrogen in the atmosphere is not in a form that they can use. The molecules of nitrogen in the atmosphere can become usable for living things when they are broken apart during lightning strikes or fires, by certain types of bacteria, or by bacteria associated with legume plants. Other plants get the nitrogen they need from the soils or water in which they live mostly in the form of inorganic nitrate (NO3-). Nitrogen is a limiting factor for plant growth. Animals get the nitrogen they need by consuming plants or other animals that contain organic molecules composed partially of nitrogen. When organisms die, their bodies decompose bringing the nitrogen into soil on land or into the oceans. As dead plants and animals decompose, nitrogen is converted into inorganic forms such as ammonium salts (NH4+ ) by a process called mineralization. The ammonium salts are absorbed onto clay in the soil and then chemically altered by bacteria into nitrite (NO2-) and then nitrate (NO3- ). Nitrate is the form commonly used by plants. It is easily dissolved in water and leached from the soil system. Dissolved nitrate can be returned to the atmosphere by certain bacteria in a process called denitrification.

Certain actions of humans are causing changes to the nitrogen cycle and the amount of nitrogen that is stored in reservoirs. The use of nitrogen-rich fertilizers can cause nutrient loading in nearby waterways as nitrates from the fertilizer wash into streams and ponds. The increased nitrate levels cause plants to grow rapidly until they use up the nitrate supply and die. The number of herbivores will increase when the plant supply increases and then the herbivores are left without a food source when the plants die. In this way, changes in nutrient supply will affect the entire food chain. Additionally, humans are altering the nitrogen cycle by burning fossil fuels and forests, which releases various solid forms of nitrogen. Farming also affects the nitrogen cycle. The waste associated with livestock farming releases a large amount of nitrogen into soil and water. In the same way, sewage waste adds nitrogen to soils and water.