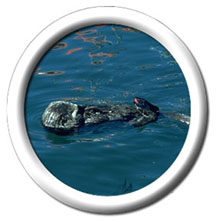 Otters are animals that can spend their entire lives in the sea. Otters can come on land, but they don't move very well there! They may just come on land during a storm. Otherwise, they stay in the water, where they are adept swimmers.

Otters often float on their backs while resting.