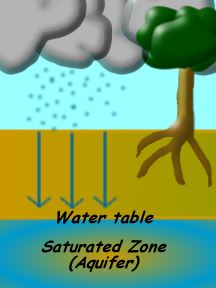 Most of the water we see each day is in ponds, rivers, oceans, streams, lakes, puddles, and other places on top of the ground. What we dont often see is the water that soaks into the ground. Water that has "gone underground" is called groundwater.

Water gets into an aquifer from the surface. Typically, precipitation falling onto the Earths surface soaks into the ground and flows down to the water table.

An aquifer is a harsh environment to live in. Not many living things can survive there besides microorganisms. Caves make a more welcoming environment for many different types of living things such as several species of bats and fish, as well as microbes.

Many people get the water they use in their house from wells that tap aquifers like a soda straw. The wells are drilled with a giant drill that is usually part of a big truck. Groundwater can become contaminated by human activity. Contaminated water has chemicals, such as pesticides or fertilizers, mixed in with the water. Wells need to be tested often to make sure there is no contamination.