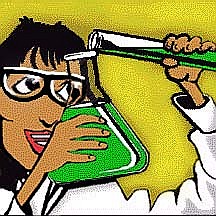 You pour a blue liquid into a red liquid. After the bubbling and frothing stop the mixture becomes yellow. What happened? A chemical reaction!

Not everything will react with each other. Some things just mix together like chocolate and milk.