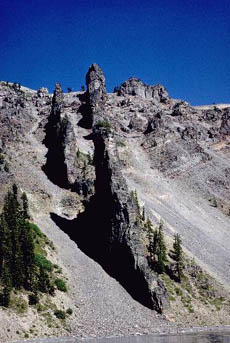 Over time, rocks wear away just like your favorite jeans or the bottom of your shoes. This is called weathering. There are two ways that it can happen. Either rocks wear away chemically, or they physically break apart.

Wearing away chemically
Sometimes the minerals in a rock are dissolved into rainwater just like table salt dissolves in a glass of water. Other times, minerals are chemically changed from one type into another. Not all minerals are likely to be weathered in this way. For instance, the mineral quartz doesnt weather very easily, but feldspar does. Over a long time, feldspar changes into clay.

Breaking apart physically
Sometimes rocks are broken apart into smaller pieces. This can happen when water flowing in rivers and streams tumble rocks and when ocean waves hit the rocks along a rocky coastline. Tree and plant roots can push rocks apart as they grow. If water freezes into cracks in a rock it will expand as it freezes, opening the crack even more.

The little pieces of rock are either moved away by water or wind, or they become a part of the soil.

We all know that today ocean waters are very salty. There aren't many sedimentary rocks older than 2.5 billion years (see geologic time) that means that there must have been mostly igneous rocks at the...more