US Department of the Interior: Press Conference on Polar Bear Listing (May 14, 2008)

Polar bears are one of natures ultimate survivors, able to live and thrive in one of the worlds harshest environments, but we are concerned the polar bears habitat may literally be melting said US Secretary of the Interior Dirk Kempthorne, in an announcement that polar bears, one of the largest four-footed carnivores on Earth, may soon be added to the list of threatened species under the US Endangered Species Act.

Roaming across Arctic sea ice, polar bears peer through cracks in the ice to look for ringed seals, their favorite food, in the water below. Almost all of a polar bears food comes from the sea, and includes seals, fish, and even beluga whales. The floating sea ice is a perfect vantage point for the bears as they hunt for food. Unfortunately, the amount of sea ice floating in the Arctic region is shrinking each year. The ice is melting as the Earth is warming. Within the next few decades, there may be no more sea ice in the Arctic Ocean during the summer. Pieces of sea ice are getting smaller and further apart. The bears must swim farther, 60 miles or more, through the chilly Arctic Ocean to get from one piece of ice to another.

Polar bears have adaptations that help them spend part of their time in the water. They are streamlined for swimming and have a layer of fatty blubber that keeps them warm. Polar bears even have tiny webs between their toes that help them swim through the water. They are classified as marine mammals even though they do not live in the water full-time like whales, dolphins, manatees, and other marine mammals. However, even with adaptations that make them exceptional swimmers, polar bears have recently been found drowned for the first time. Because the bears now have to swim farther to find the next piece of sea ice, some become exhausted during the long journey and drown.

Polar bears are moving to land on the north coast of Alaska because the sea ice is melting and no longer connects to shore. This separates the bears from their preferred hunting grounds, the sea ice. With less sea ice, polar bears cannot hunt for food as often, and so they wind up with less to eat. Polar bears, it has been reported, occasionally eat land animals like reindeer and musk oxen. Even so, scientists have found that polar bears weigh less than they used to and that polar bear cubs off the North coast of Alaska are less likely to survive. In Canadas Hudson Bay the number of bears has dropped 22 percent.

During 2007, the US Fish and Wildlife Service studied whether polar bears should be added to the list of threatened species. On May 14, 2008 they added polar bears to the list. This is the first time a species has been added under the Endangered Species Act directly because of global warming. The US Fish and Wildlife Service estimates that because of the rapid melt of Arctic sea ice, polar bears could become endangered species in 45 years.

To better understand how dire the situation is for polar bears, the US Fish and Wildlife Service asked the United States Geological Survey (USGS) to study how fast the bears' sea ice habitat is melting. According to their reports, melting sea ice will result in the loss of about two-thirds of the world's current polar bear population by the middle of this century. These results were based on the results of climate models, models which, the USGS notes, appear to underestimate how fast the sea ice is actually melting. So the ice may melt much more quickly.

Inuit Culture in a Warming Arctic

The climate of the Arctic region is warming quickly, faster than other places on Earth, and the Inuit who live there have been noticing substantial changes to the environment.  Climate change is amplified...more

In the north polar region, the climate has warmed rapidly during the past few decades. Average temperatures in the Arctic are rising twice as fast as they are elsewhere in the world. In Alaska (USA) temperatures...more 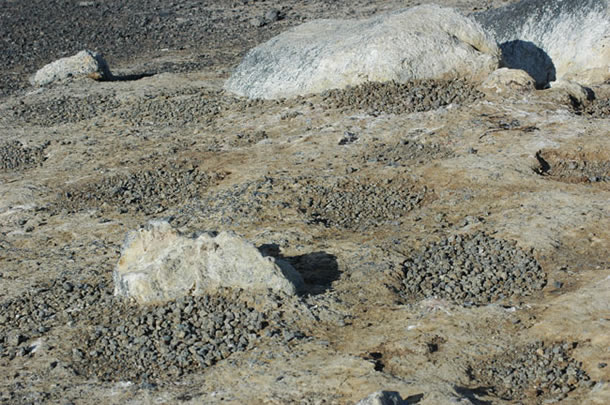