Newly Unveiled Satellite Map of Antarctica Is a Unique Tool for Scientists, Educators and the Public

What Will You Find There?
South of the Antarctic Circle (at 66.5°S latitude) you will find the continent of Antarctica surrounded by the Southern Ocean, the geographic South Pole and the magnetic South Pole, and a large amount of ice covering the land and spilling over adjacent seas as ice shelves. The aurora, called the Southern Lights in the Southern Hemisphere can be visible. There are large mountains and active volcanoes on the continent. You will also find wildlife such as several species of penguins and many other birds such as albatrosses and skuas. Seals and whales can be found in the ocean water surrounding Antarctica, as well as tons of small shrimp-like arthropods called krill that swim in large schools.

Scientists at Research Stations
In the summer there may be as many as 4000 people in the Antarctic at scientific research stations including McMurdo Station on the shore of McMurdo Sound, Amundsen-Scott South Pole Station at the geographic South Pole, and Halley Research Station on an ice shelf in the Weddell Sea. The scientists visiting Antarctica are doing various types of research including studies of biology, geology, oceanography, astronomy, astrophysics, glaciology, climatology, and meteorology to better understand this part of our planet. Some of these people stay year-round at the research stations, even during winter when there is little or no daylight in this region.

The South Pole
Atop the 2700 meter (9000 foot) thickness of ice that covers the land at the South Pole, scientists have marked the location of the geographic pole with a marker sign. The brass-topped marker sign is about twelve feet long. About eight feet of it gets pounded into the ice to hold it in place. The rest sits above the ice. Each year the marker moves approximately 10 meters (30 feet) away from the Pole as the ice flows. So, on the first day of January, scientists at the South Pole Station add another marker at 90 degrees south latitude to re-mark the true location of the geographic South Pole. 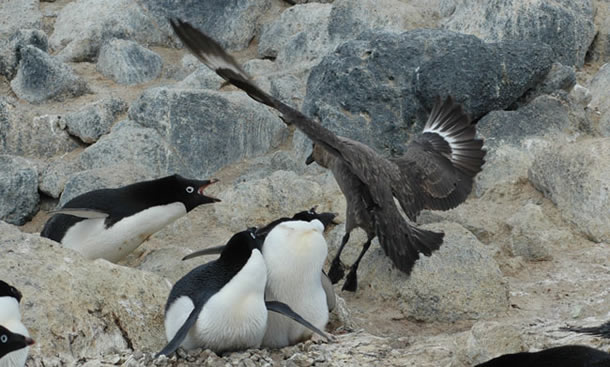 The invading bird in this photograph is called a skua. Skuas fly over the nesting areas all day long looking for opportunities to carry off a meal. They too have chicks to feed and rely on the penguin...more 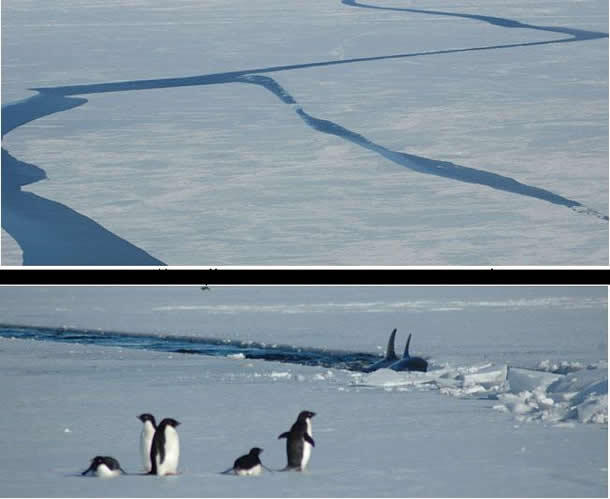 Sea Ice Is Breaking Up

As the Antarctic summer progresses, the sea ice melts. This sea ice covers the top of the ocean next to the continent and the Ross Sea. Large cracks open up in the expanse of ice which allows whales to...more