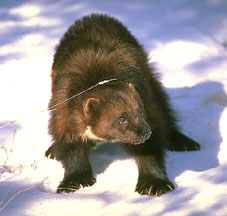 This wolverine looks like a cute little bear. But don't be fooled! They can be dangerous!
Click on image for full size
Courtesy of Corel Photography

The tundra is full of carnivores, animals that eat meat. Bears, wolves and even bats fill the tundra with life. Let's explore these creatures further!

Wolves are the better predators of the tundra. They travel in small families and attack caribou and other large herbivores that are too slow to stay with the pack. Some wolves change to a bright white color in the winter.

Wolverines have a reputation of being ferocious and strong. They look like small bears, but they pack a mean punch. Wolverines feed on dead carcasses, but sometimes kill their own prey. Otters and minks are in the same family as wolverines. Otters live near rivers and lakes so they can feed on fish.

Even bats are found in the tundra during the summer! They feed on the swarms of insects that fill the air. 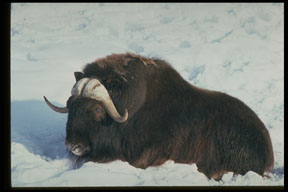 There are so many interesting mammals in the tundra, they had to be divided into two groups! You can read about carnivores here. Musk-ox and caribou are the largest herbivores in the tundra region. Both...more