One of the ways we can see density illustrated in everyday life is by looking at whether things float or sink in a liquid (water, for example). If an object is less dense than the liquid it is placed in, it will float. If it is more dense, it will sink. This is why an anchor, which is very dense (lots of mass in a relatively small volume) sinks very quickly, while an inner tube (not much mass in a relatively large volume) floats and is very difficult to push underwater.

Some elements are naturally found in very dense forms, and one of the most visually surprising demonstrations of the concept of a less dense object floating on a denser liquid occurs when objects are put in a container of liquid mercury (Hg). This element is a metal that is liquid at room temperature, and it is VERY dense. In fact, it is denser than lead, and metal objects like forks, coins, or even a cannonball will float on top of it!

A Jupiter moon that has more holes than Swiss cheese!

Amalthea , a small moon of Jupiter, is not made of Swiss cheese, but it does seem to be full of holes making its density surprisingly low. Roughly the shape of a potato, Amalthea is a small, reddish moon...more

The periodic table on the left separates the elements into three groups: the metals (green in the table), nonmetals (orange), and metalloids (blue). Most elements are metals. They are typically shiny,...more 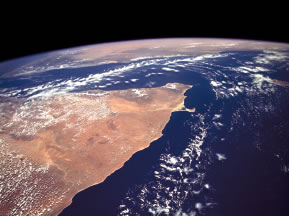