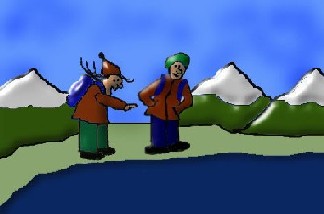 By studying what lives in the highest lakes on Earth, scientists hope to learn how life may survive in other harsh environments throughout the solar system.

One of the lakes that will be studied is a caldera that sits atop Licancabur volcano in the Andes Mountains of Chile. A caldera is the name for a lake that forms in the collapsed top of a volcano. The harsh environmental conditions at this caldera make it one of the most Mars-like places on Earth.

Even though the lakes are in harsh environmental conditions, certain tiny life forms can survive and the scientist team hopes to learn how they do this. Only by going there will we find out, says Dr. Nathalie Cabrol, the principle investigator of the project, whose team will identify and describe the organisms that they find in the lake during the 25-day mission to the Andes Mountains which began on October 16, 2002. If the scientists know how these life forms survive harsh conditions on Earth, they can understand the ways that life may have adapted to exist on Mars, or Jupiters moon Europa, today or in the past.