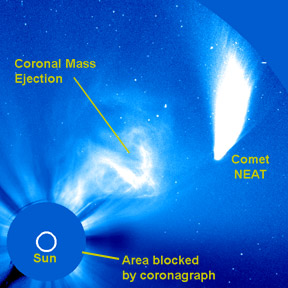 The comet shown in this picture is so neat that scientists named it Comet NEAT! Actually, this comet was discovered by NASA's Near Earth Asteroid Tracking (NEAT) program, so that is the real reason it is called Comet NEAT. This time NEAT found a comet instead of an asteroid. Comet NEAT (which is also called Comet C/2002 V1) was discovered in November 2002.

This picture was taken by a spacecraft called SOHO. When the SOHO spacecraft took this picture, we couldnt see Comet NEAT from Earth because the comet was too close to the Sun. SOHO has a special instrument called a coronagraph which blocks the brightest light from the Sun. A coronagraph is a lot like a solar eclipse in the way it blocks the Sun's light

Comets are made mostly of ice. When a comet gets near the Sun, the heat from the Sun makes some of the ice melt. Scientists like to study comets that are close to the Sun to see how the comets change as they melt. This picture also shows a Coronal Mass Ejection (CME). A CME is a huge explosion on the Sun. Scientists want to learn what a big explosion does to a comet when it is this close to the Sun.