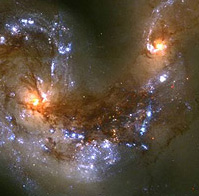 It must have looked like something straight out of the movie Contact. This wasn't a computer graphic though, it was nature's "firework" display. The Hubble Space Telescope has recently uncovered a pair of colliding galaxies. Within the galaxies are over 1,000 brilliant young star clusters.

The images that Hubble has taken are spectacular! What surprised scientists even more than the clarity of the images was the number of young star clusters found in the midst of the colliding Antennae galaxies (called Antennae because of the long wisps of stars that resemble an insect's antennae) .

Dr. Francois Schweizer of the Carnegie Institution said, "This galaxy is an excellent laboratory for studying the formation of stars and star clusters since it is the nearest and youngest example of a pair of colliding galaxies." This is certainly a monumental finding. It is likely to change what we know of star and galaxy formation. It also promises to reveal the future fate of Earth's home, the Milky Way galaxy. The Milky Way will at sometime in the distant future collide into our neighboring Andromeda galaxy.