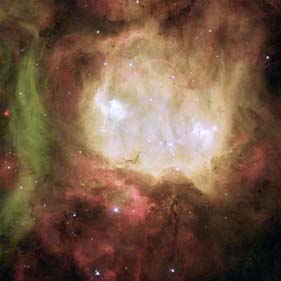 This image of the NGC 2080 nebula was taken by NASA's Hubble Space Telescope. Because it is red and white and green, it looks like something that could be on front of a holiday card! The name of the nebula isn't quite so appropriate for the holiday season as it is nicknamed the "Ghost Head Nebula". Still, these holiday colors, produced by the light emitted by oxygen and hydrogen, help astronomers investigate the star-forming processes in nebulas such as NGC 2080.

Other holiday happenings include Houston, mission control, being transformed to "Santa Control" this Christmas Eve. NASA experts will help monitor Santa's speed and reindeer performance, helping Santa meet the extreme demands placed on him during this 24-hour period. "With three people living on the space station, we have a unique vantage point to help Santa on his rounds," said Matt Abbott, flight director. "We have Yury Onufrienko, Dan Bursch and Carl Walz on board the station ready to help us out with real-time Santa sightings, and our flight control team is ready for this opportunity." "Santa Control, Houston" will be shown on NASA Television during the NASA Video File December 24, which will air at noon, 3 p.m., 6 p.m. and 9 p.m. EST.