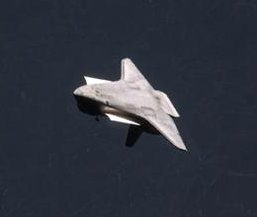 The Atlantis shuttle landed at Edwards Air Force Base in California on February 20, 2001, at 2:33 p.m. CST. The shuttle was supposed to land at Kennedy Space Center in Florida, but the weather just wasn't cooperating! Atlantis carried 5 astronauts and the Destiny laboratory to the International Space Station (ISS). The crew of Atlantis helped the ISS crew to connect the Destiny laboratory to the ISS. Everything was a big success!