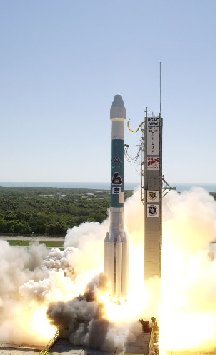 For the last year, the Mars Program Director, G. Scott Hubbard fixed problems and gave the NASA Mars Exploration program solid footing. "Scott Hubbard was given 'mission impossible' and turned it into 'mission accomplished,'" said Dr. Ed Weiler, Associate Administrator for Space Science at NASA. Hubbard announced today that he will be leaving his post as Mars Program Director, but he will be leaving things in good hands with the new Director, Orlando Figueroa.

Things have already gotten off to a good start! The 2001 Mars Odyssey probe was launched on April 7, 2001. It is scheduled to get to Mars in October 2001. While it orbits the Red Planet, the Odyssey will collect data about what makes up the Martian surface. It will also look at potential radiation hazards for future human explorers.

Five other major Mars missions are being planned for the next decade. NASA plans to launch twin rovers which will land on Mars in 2003 and a powerful scientific orbiter to be launched in 2005. A mobile science laboratory and the first of several smaller Scout missions are planned for 2007. Wrapping up this phase of exploration would be a sample return mission possibly as early as 2011. A sample return mission is where rocks and dirt would be brought back to Earth from the surface of Mars. Cool!