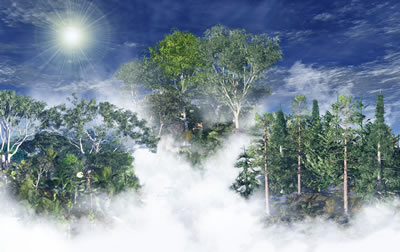 There are roughly 42 million square kilometers of forest on Earth, a swath that covers almost a third of the land surface, and those wooded environments play a key role in both mitigating and enhancing global warming.
Click on image for full size
Image Courtesy of Nicolle Rager Fuller, National Science Foundation

There are roughly 42 million square kilometers of forest on Earth, a swath that covers almost a third of the land surface, and those wooded environments play a key role in both mitigating and enhancing global warming.

In a review paper appearing in this week's Forest Ecology special issue of Science, atmospheric scientist Gordon Bonan of the National Science Foundation's National Center for Atmospheric Research in Boulder, Colo., presents the current state of understanding for how forests impact global climate.

"As politicians and the general public become more aware of climate change, there will be greater interest in legislative policies to mitigate global warming," said Bonan. "Forests have been proposed as a possible solution, so it is imperative that we understand fully how forests influence climate."

The teeming life of forests, and the physical structures containing them, are in continuous flux with incoming solar energy, the atmosphere, the water cycle and the carbon cycle--in addition to the influences of human activities. The complex relationships both add and subtract from the equations that dictate the warming of the planet.

While even the earliest European settlers in North America recognized that the downing of forests affected local climates, the global impact of such activities has been uncovered over more recent decades as new methods, analytical tools, satellites and computer models have revealed the global harm that forest devastation can cause.

"Climate change research is an important focus of NSF sponsored research," added Clifford Jacobs, section head for NSF's UCAR and Lower Atmospheric Facilities Oversight Section. "The investments in climate research to date have clearly articulated the complexity of the climate system. For this complexity to fully reveal itself, sustained investment in researcher, research centers, and scientific instrumentation and cyberinfrastructure will be necessary."

As studies have explored the mechanisms behind these effects, and the effects themselves, researchers have come to recognize that calculating the specific harm from a specific local impact is a highly complicated problem.

"We need better understanding of the many influences of forests on climate, both positive and negative feedbacks, and how these will change as climate changes," said Bonan. "Then we can begin to identify and understand the potential of forests to mitigate global warming."

Bonan's review paper, an additional video interview and other supporting materials for the June 13, 2008, forest ecology issue of Science are available through their website: http://www.sciencemag.org/forests/. For details please contact AAAS/Science communications officer Natasha Pinol at npinol@aaas.org .