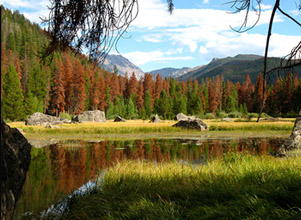 In the forests of the southern Rocky Mountains, trees are being killed by beetles that eat bark. Scientists are looking at forests where the beetles are eating the trees. They want to understand how trees affect weather, air pollution, and climate change.

Each little beetle is only the size of a grain of rice. But just because these beetles are small, doesn't mean they are not important. There are more beetles in these forests now than there were a few years ago. And many of them can eat a lot of bark. Together, millions of beetles kill huge forest trees.

"Forests help control the atmosphere," says scientist Alex Guenther.  He says that there is a big difference between the way living forests and dead forests control the atmosphere. Scientists think that weather and air quality may be changing as trees die because of the beetles. Forest trees send water vapor, other gases, and little particles into the air. These gases and particles may be tiny but they can have a big impact on the atmosphere.

Climate can be affected too. Temperature in the area could get warmer as trees die. This is because the dead trees send the greenhouse gas carbon dioxide (CO2), into the air.  Also affecting climate, the dead trees do not reflect as much of the Sun's heat back into space, holding more heat close to the Earth.