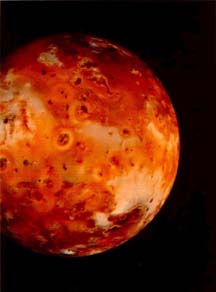 Io, moon of Jupiter
Click on image for full size
Courtesy of NASA

Exploratour: Volcanoes in the Solar System

Astronomers have discovered that the volcanoes on Io, a moon of Jupiter, are shooting salt into the moons atmosphere. The salt spurts out in the form of a gas adding sodium to the clouds.

Scientists have known that Ios atmosphere was salty for decades but they did not know why. Bob Brown discovered sodium, an element within salt, in the clouds of Ios atmosphere in 1974. He was surprised that no one had found it before, but, as Darrell Strobel, a professor at Johns Hopkins University said about the discovery, nobody was looking for it; nobody would have guessed it was there.

Now scientists like Darrell Strobel have discovered that it is the many volcanoes that are causing the moon to be so salty. Io is more volcanically active than any other planet or moon in our solar system. Roughly two tons of volcanic material are tossed into Ios magnetosphere every second, says Darrell Strobel.

Scientists intend to do future analyses to understand how the salt is broken down into sodium and chlorine atoms within the moons atmosphere.