This image shows the varied terrain of Ganymede.
Click on image for full size
NASA

The surface of Ganymede is halfway between that of Callisto and that of Europa. Portions of the crust are of ancient age, while other portions are relatively new.

The little white dots shown in this image are the many imact craters on Ganymede. Portions of Ganymede that are heavily cratered have not been resurfaced, indicating that they are of ancient age.

Besides the craters, the surface of Ganymede is characterized by grooved terrain, light terrain, dark terrain.

The many different kinds of terrain exhibited by Ganymede are an indication that it has experienced processes of alteration in the interior during it's evolution.

The surface of Callisto is deeply pockmarked with craters. It looks to be perhaps the most severely cratered body in the solar system. There are also very large craters to be found there. The severity...more

The picture to the left shows examples of the many amazing different surface features of Europa. Many exciting discoveries were made about Europa during the Galileo mission. The surface of Europa is unusual,...more 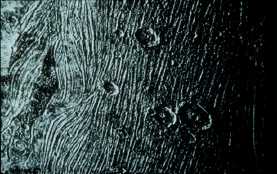 The Grooved Terrain of Ganymede

This image shows an example of the grooved terrain of Ganymede. The image clearly shows that some things hit Ganymede and made craters after the grooves were made, because the grooves are underneath the...more 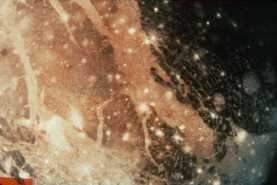