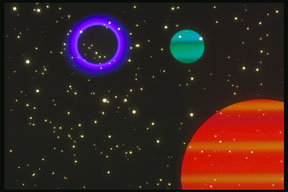 Uranus was discovered accidentially in 1781 by William and Caroline Herschel. People had seen it many times before, but had just assumed it was a star.

Neptune was mathematically predicted by John Couch Adams and Urbain Jean Joseph Le Verrier. They calculated that Uranus' actual position was different than what it should have been, based on Newton's equations. Therefore, they figured, there must be an unknown body disturbing Uranus' orbit. They calculated where the unknown body should be, then asked an astronomer to check. Neptune was discovered in 1846, almost exactly where it was predicted to be.

Clyde Tombaugh found Pluto in 1930 by systematically taking pictures of the solar system. He looked for anything that moved against the backdrop of the stars, and found Pluto.