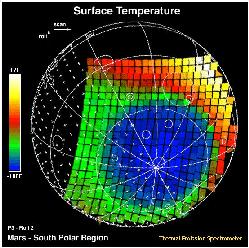 This graph contains information about the surface temperature of Mars.
Click on image for full size
Image from: NASA/JPL

Return to the Surface and Interior of Mars

Return to the Atmosphere of Mars

This image shows how cold the surface of Mars can be. The temperature was measured by the Mars Global Surveyor spacecraft. The scale to the left shows that purple regions are the coldest, about -170 degrees F (-113C), while the yellow areas are the warmest at about 17 degrees F (-8C). The surface of Mars may often become warmer than 17 degrees. Other data returned by Mars Global Surveyor shows the temperatures can be 30 degrees F (~0C) or more. These temperatures are very cold, however. The surface is either freezing cold or much colder than freezing. No wonder the water of Mars may be frozen into the ground! Freezing temperatures may have something to do with the thin atmosphere and lack of a greenhouse effect.

It has been more than 30 years since America's first exploratory missions to Mars. Here are some of the instruments carried onboard Mars Global Surveyor (called MGS for short). Many of these instruments...more

These are some of the initial findings of Mars Global Surveyor. There definitely is a magnetosphere near Mars. suggests scientists must rethink theories about the evolution of Mars. Geologic features at...more