Valles Marineris, from the Viking orbiter of 1976. Viewing of this image in high resolution is recommended
Click on image for full size
Image from: NASA/JPL

You may remember the Mars Pathfinder lander and rover that landed on Mars in 1997. The rover bumped into rocks named Scooby Doo, Shark, Pooh Bear and Chimp!

In April 2001, the 2001 Mars Odyssey was launched. It got to Mars in October 2001. The European Space Agency sent the Mars Express mission to the Red Planet. It reached Mars on Christmas day in 2003. Mars Express also had a small lander called the Beagle 2. NASA launched two Mars Exploration Rovers in June and July of 2003. They have been driving around on Mars since January 2004. Mars Reconnaissance Orbiter is another satellite that is mapping Mars from orbit. It was launched in August 2005 and made it to Mars in March 2006.

The Phoenix Mars Lander was launched in August 2007. It will land near the North Pole of Mars in May 2008. Phoenix will use a robotic arm to dig up samples of Martian soil. Scientists hope Phoenix will find water ice just below the surface.

What about the future? NASA is sending another, bigger rover to Mars in 2009. It is called the Mars Science Laboratory. Some day we may send airplanes or balloons to roam the Martian skies. We might send a drilling rig to search for water and maybe signs of life underground. Scientists also hope a there will be sample return mission some day. It would bring Mars rocks back to our planet so scientists could study them in laboratories on Earth. 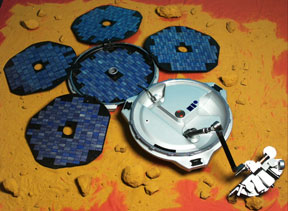