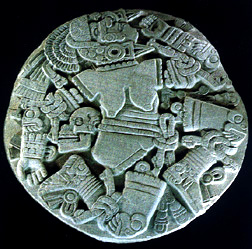 Coyolxauhqui represents the Moon in the Aztec mythology. Her name means "Golden Bells." She was slain and dismembered by her brother, the Sun god Huitzilopochtli because she instigated their other four hundred sisters and brothers to kill their mother, Coatlicue.

Coatlicue was magically impregnated with Huitzilopochtli after a ball of white feathers fell from the heavens and touched her breast. Coatlicue's children thought that their mother had disgraced them with her mysterious pregnancy. Huitzilopochtli, born fully clothed in a blue armor from his mother, killed Coyolxauhqui and his other four hundred star sisters and brothers.

Coatlicue regretted such violence. Thus, Huitzilopochtli cut off Coyolxauhqui's head and threw it into the sky to form the Moon, aglow with the golden color of her bells. Huitzilopochtli was also known as the god of war and the chief god of Tenochtitlan, the Aztec capital city.