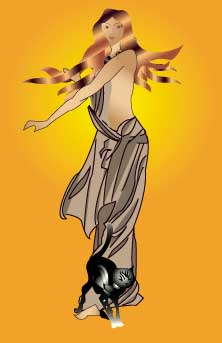 The Norse mythology associates the aurora with the goddess Freya. Freya was the goddess of beauty and love. The fifth day of the week, Friday was named after her. Her twin brother is the sun god Freyr and her parents are Njord and the giantess Skadi.

She is always depicted wearing a famous necklace, called a brisling. It was given to her by the dwarfs in exchange of a night of love with them. Freya also represented the goddess of battle and death. She had the right to choose half of all men slain in battle. The other half was chosen by the Valkiries, assistants of Odin. The half of warriors chosen by Freya went to feast in the Freya's hall, called Folkvangar.

Freya was a very beautiful goddess. Only Odin could look at her and not fall in love. One day, a man offered to rebuild the wall surrounding Asgard if he could have Freya as his wife. Loki convinced the gods that the man could never finish the wall in six months, so they agreed. However, with the help of his horse, the man came very close to completing the wall.

Desperate, the gods forced Loki to stop the man. He sent another horse to distract the man's. He failed to finish the wall, and showed his anger by unveiling his disguise. The man was in fact a rock giant. The gods immediately went back on their word, and Freya was free from the man's grasp.