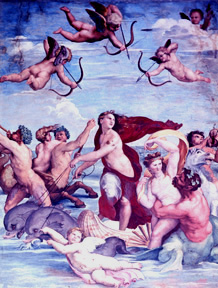 Galatea, whose name means "milk-white," was a sea nymph, one of the Nereids, who lived in the sea surrounding the island of Sicily. The one-eyed Cyclops Polyphemus, who lived in Sicily with his flocks of sheep and goats, was desperately enamored of Galatea who instead preferred the young shepherd Acis, son of Pan.

Galatea and Acis used to mock the serenades that Polyphemus sang for Galatea. Once Polyphemus caught the pair sleeping on a grassy mound; he violently killed Acis by crushing him under a huge rock. Acis blood formed a small stream beneath the rock that Galatea turned into a stream of water that was named after him.

Another version of the legend suggests the existence of a mutual love between Galatea and Polyphemus. They were the parents of three mythical heroes: Galas, Celtus, and Illyrius from whose names derive those of the Galatians, the Celts, and the Illyrians.

Galatea is involved in yet another story. Pygmalion, unhappy with the women in his city, decided to carve a statue to be his wife. Aphrodite granted his wish that the statue come to life. It is said that Pygmalion named his new partner Galatea.

Because Galatea was a sea-nymph and attendant of the sea-god Poseidon, her name had been given to one of the moons of the planet Neptune.