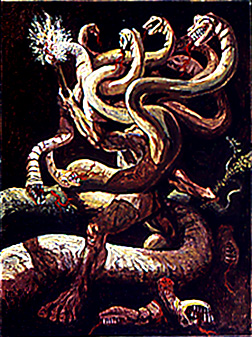 A long time ago, Greek people believed that a long strip of Zeus was really an image of a gigantic serpent known as the Hydra. The people of Lerna were terrorized by this serpent--a horrifying beast with many snake-like heads, one of which was immortal. The heads of the Hydra could grow back even if they were cut off. Anyone approaching the Hydra could also be killed by its venomous breath. The Hydra lived beneath a tree near a swamp.

The destruction of the Hydra was one of the many difficult tasks that Heracles, a Greek hero known for his strength, had to perform to show that he was sorry for a terrible crime he committed. Hera cast a spell on him that forced him to kill his wife and children.

Heracles was so brave and strong that he succeeded in killing the Hydra, with the help of his nephew, Iolaus. Everytime Heracles would cut off one head of the beast, Iolaus would sear its injured neck, preventing new heads from growing back.

During their fight, an enormous crab emerged from the swamp to aid the Hydra. Heracles killed the crab by crushing its shell with his foot. Heracles buried the Hydra's head under a heavy rock. When Heracles reported his victory to King Eurytheus, the king said this was not a real victory for Heracles because he was helped by Iolaus.