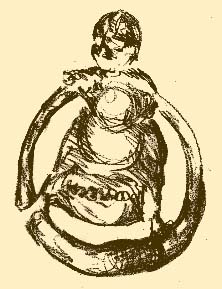 Njord was the god of the sea and winds in Norse mythology. He is the father of Freyr and Freya and the leader of the Vanir. Njord was married to the giantessSkadi. Skadi's father was slain by the gods. To make up for her loss, Skadi was allowed to choose a husband from the gods.

She was not permitted to look at their faces, only their feet. She chose the most beautiful feet she saw, thinking they belonged to the god Balder. Instead, they were the feet of Njord. Skadi was used to living in the icy mountains, and Njord was used to living by the sea. This made their marriage difficult, and eventually they chose to live apart from each other.