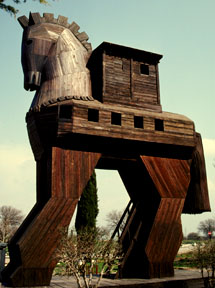 The famous Greek hero, Odysseus, was known to Romans as Ulysses. Odysseus was the king of Ithaca, a small island in the Ionian sea, where he lived with his wife Penelope. After fighting the war at the city of Troy, Odysseus tried to sail back home.

During his journey he had many amazing adventures, but his brain helped him to survive. After ten years of traveling, he finally reached his house.