Sin was the Sumerian Moon god. Sumerians were living more than three thousand years ago in Mesopotamia. Mesopotamia is the ancient name of the region that corresponds to the valleys of Tigris and Euphrates rivers. Today Mesopotamia is located in the territories of the states of Iraq and Kuwait.

Sin was born from the rape of the grain goddess Ninlil by Enlil. For this crime, Enlil was banished by the assembly of the gods to live in the underworld. When Ninlil realized she was pregnant, she decided to follow Enlil to the world of the dead to let him witness the birth of his child. Unfortunately the birth of the child in the underworld would have imprisoned him forever in Hades.

Thus, Enlil and Ninlil copulated three more times to offer the three children who were going to be born to the infernal deities. At last, their first child Sin could ascend to the heavens to light the night sky. This myth related to Sin's birth explains why Sumerians viewed a lunar eclipse as an attack of demons against the Moon. During the lunar eclipse, Sumerian kings used to wash themselves believing these rites could bring the purification of the Moon. 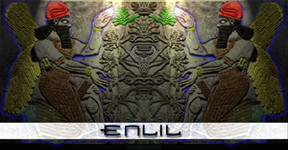