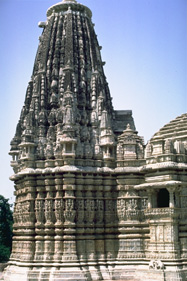 Hinduism is the oldest and the major Indian religion. Hinduism is based on some antique sacred writings and the assimilation of many different cultures and religious beliefs from other peoples. The oldest Hindu writing is the Rig Veda which is a collection of songs and hymns composed over 3,000 years ago. Many are the gods and goddesses described in the sacred Hindu writings.

In the Hindu pantheon, Surya is the Sun god. He is one of the twelve Adityas, the guardians of the months of the year. Surya is depicted as a red man with three eyes and four arms, riding in a chariot drawn by seven mares. Aruna who represents the dawn drives Surya's chariot. Surya holds water lilies with two of his hands. With his third hand he encourages his worshipers whom he blesses with his fourth hand. In the states of Bihar and Tamilnad, Surya is believed to be a benevolent deity capable of healing sick people and bringing good fortune. That is why, the symbol of the Sun is also today placed over shops and stalls in open market.

Surya's wife is Sanjna (conscience). When they married, Sanjna could not bear the overpowering light and heat of Surya. Therefore, she fled into a forest, arranging for her handmaid to take her place. In the forest, Sanjna transformed herself into a mare to prevent Surya from recognizing her. But Surya soon discovered the refuge of his wife. He went to the same forest in the guise of a horse and mated with her.

As a result, Sanjna gave birth to several children and eventually reunited with her husband. However, the heat and the light of Surya were so intense that Sanjna was always exhausted doing her domestic duties. Finally, Sanjna's father decided to help her and trimmed Surya's body reducing his brightness by an eighth. Thus, the heat produced by the Sun god was more tolerable.