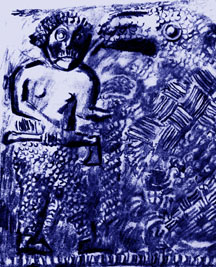 The sketch above is based on a die for making helmet plates, found on the island of Oland. It depicts the god Tyr holding a monster, the wolf Fenrir.
Click on image for full size
Sketch by Rei Inamoto.

In the early centuries after the birth of Christ, Tyr was not only the sky god but also the god of war in the Scandinavian pantheon. Warriors would put his initial on their weapons to give them help. Tyr was renowned for having sacrificed one of his hands for the common good of the gods. In the land of the gods, named Asgard, there was a demonic wolf called Fenrir who was ceaselessly growing.

The beast was so huge and fierce that only Tyr dared to approach him. The gods decided to bind him. A special chain, which could not be broken, was forged by skillful dwarfs. Unfortunately, the wolf refused to be bound unless one of the gods would put a hand in his mouth to demonstrate that the chain was harmless.

When Tyr offered his hand, the beast was disappointed to find out that the chain was unbreakable. The gods finally felt safer but Tyr lost his hand. The role of Tyr as a Sky god was assumed by Odin around the eighth and ninth centuries.