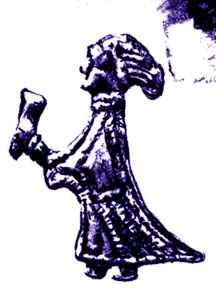 It has been suggested that the northern lights, or aurora, represented the reflections of the shields of the Valkiries in Norse mythology. The Valkiries, whose name means "Chooser of the fallen", were female warriors and special assistants of Odin, the upper deity.

The Valkiries were beautiful maidens sent by Odin to every battle to choose which warriors that died should be escorted to Valhalla. The Valkiries could choose only half of the warriors who died. The other half was chosen by the goddess of beauty and love, Freya. In Valhalla, the slain warriors, named Einherjar, were welcomed with horns of ale by the Valkiries.

Valhalla was Odin's hall in Asgard, the home of the gods. Its walls were made of shields and its roof of spears. Its entrance was the gate of death, Valgrind.