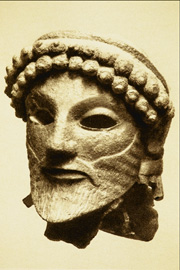 In Greek mythology, Zeus (Jupiter in Roman mythology) was the king of heaven and Earth and of all the Olympian gods. He was also known as the god of justice. He was named king of the gods in the special meeting that followed his overthrow of the god Cronus and the Titans.

In Greek mythology, Cronus was the son of Uranus and Gaea. He lead his brothers and sisters, the Titans, in a revolt against their father and became the king of the gods. He married the Titan Rhea. They...more

For the ancient Greeks, the constellation Cygnus, which means "swan", was related to the myth of Zeus and the goddess Nemesis. In order to escape from Zeus, Nemesis changed herself into many different...more

For the ancient Greeks, the constellation Cygnus, which means "swan", was related to the myth of Zeus(called Jupiter by Romans) and the goddess Nemesis. In order to escape from Zeus, Nemesis changed herself...more