A family enjoying the evening sky with binoculars and a telescope.
Image courtesy Wikimedia Commons

With just our eyes, we can see many things in the night sky, including stars, planets, meteors, comets, auroras, and the Moon. Have you ever looked up and wished that you could take a closer look at the Moon or see the rings of Saturn?  You have probably seen photographs of distant galaxies, exploding stars, and glowing nebulas.  Did you wonder how those photos were taken?

For the past 400 years, telescopes have helped astronomers see into the depths of outer space.  Although there are many different types of telescopes, they all work in a similar way.  A telescope is an instrument designed to collect electromagnetic radiation for the observation of remote objects.  The word telescope comes from the Greek words tele=far and skopein=to look or see.

The first known telescope was built by the Dutch lens-maker Hans Lippershey in 1608.  Word of this invention spread quickly and by 1609 an Italian scientist named Galileo Galilei built his own and began studying the sky.  Galileo made many important discoveries with his new telescope, including craters on the surface of the Moon, four large moons of Jupiter, and the phases of Venus.  He used his telescopes to study sunspots, discovering that the Sun rotates on its axis.

Today the word telescope can refer to a whole range of instruments operating in most regions of the electromagnetic spectrum, from the longest radio waves to the shortest gamma rays.  They have been placed in the middle of deserts, the top of mountains, and even at the South Pole to better see the sky.  The Hubble Space Telescope is just one of many that have been placed in outer space and there are even a few neutrino telescopes that are built underground. 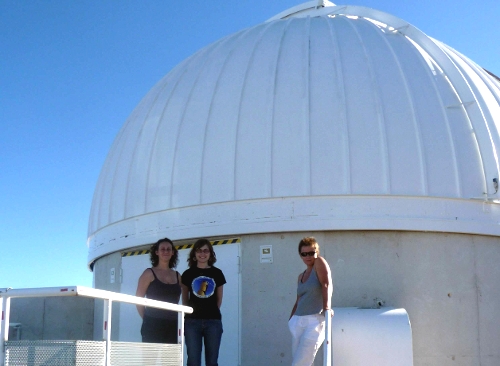