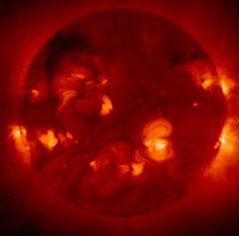 This is an X-ray image of the Sun taken with the Soft X-Ray Telescope (SXT) on the orbiting Yohkoh satellite. This particular image was taken on November 23, 1999.
Click on image for full size
ISAS/Yohkoh team/Lockheed Palo Alto Research Laboratory

X-rays are a high-energy type of electromagnetic (EM) radiation. X-ray radiation has a much shorter wavelength than visible light, so X-ray photons have much higher energies than photons of light.

X-rays lie between ultraviolet "light" and gamma rays on the electromagnetic spectrum. X-rays have wavelengths between about 10 nanometers (10 x 10-9 meters) and 10 picometers (10 x 10-12 meters). X-ray radiation oscillates at rates between about 30 petahertz (PHz or 1015 hertz) and 30 exahertz (EHz or 1018 hertz).

X-rays have long been used to "see" through skin and muscle tissue to make medical "X-ray images" of bones when checking for fractures. X-rays that arrive at Earth from space are absorbed by our atmosphere before reaching the ground.

Earth's global magnetic field generates a huge cavity or bubble in space, the magnetosphere, which shields our planet from most of the solar wind. Some solar wind particles do leak in and combine with...more

Electricity and magnetism are two closely related and very important topics within the science of physics. We use electricity to power computers and to make motors go. Magnetism makes a compass point North...more