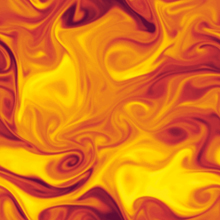 Turbulence is disordered motion of a fluid. What does disordered mean? Well, as some scientists are fond of saying, "it's hard to define but you'll know it when you see it" (the same can be said for alot of other things too, including life itself).

You can get a good idea of what turbulence is by thinking about what all turbulent flows have in common:

In astronomical objects such as planets and stars turbulence is usually caused by buoyancy (warm fluid rises and cool fluid sinks due to gravity) or shear (winds or currents going in different directions). On November 1st I flew onboard the Twin Otter aircraft. This day was an incredibly interesting day to fly. Not only did we fly through a large stratocumulus cloud but we also flew through lots of smaller...more

Mechanics is the term used to refer to one of the main branches of the science of physics. Mechanics deals with the motion of and the forces that act upon physical objects. We need precise terminology...more