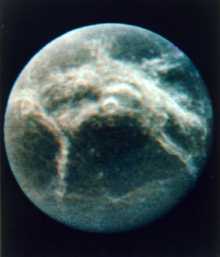 This is an image of Dione.
Click on image for full size
NASA/JPL

Comparison of Dione and Earth's moon

Dione was discovered by G. Cassini in 1684. Dione is the 7th farthest moon from Saturn. It is a small icy moon, lightly cratered, with white streaks across the surface. Dione is about as wide as the Oregon coast is long.
Last modified January 19, 2001 by Jennifer Bergman.

Icy moons are moons which are made of ice. These moons are unlike the earth's moon, which is made of rock. Perfect examples of icy moons are 3 of the Galilean satellites, Europa, Ganymede, and Callisto....more

The Surface of Dione

The surface of Dione does not have many craters, which means that the surface has changed in the past. Instead of many craters, it has wispy white streaks like the ones on Rhea, which go for many kilometers...more

This is an image of the Earth's moon, shown in the lower left, with the icy moons of Saturn. The moons in order, starting from the top left are: Mimas, Enceladus, Tethys, Dione, Rhea, and Iapetus. ...more

Rhea was discovered by G. Cassini in 1672. Rhea is the 5th farthest moon from Saturn. Rhea is one of the icy moons. Rhea is about as wide as the state of California is long. Rhea is has many craters and...more

The planet Saturn has a lot of moons. It has a total of // Call the moon count function defined in the document head print_moon_count('saturn'); moons! Saturn also has huge rings which you can see in any...more

Dione was discovered by G. Cassini in 1684. Dione is the 7th farthest moon from Saturn. It is a small icy moon, lightly cratered, with white streaks across the surface. Dione is about as wide as the Oregon...more

The Surface of Enceladus

The surface of Enceladus does not have many craters. Instead it has grooves similar to those found on Ganymede. These grooves extend for many kilometers over the surface. The presence of grooves indicates...more

Helene was discovered on February 29, 1980, by French scientists. Although Helene is very far away, they were able to see this small moon by using a powerful telescope and fancy camera. A few months later,...more