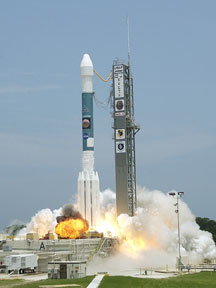 A rocket carrying Spirit blasts off from Florida on June 10, 2003.
Click on image for full size
Image courtesy NASA.

Both Mars Exploration Rovers (MER) were launched from Florida in the summer of 2003. The first, Spirit, blasted off on June 10. The second, Opportunity, blasted off on July 7. Each spacecraft spent about six months in space on the way to Mars.

The spacecraft were going very fast, about 19,000 km per hour (12,000 mph), when they got to Mars! They slowed down very quickly when they went into the atmosphere of Mars. Their heat shields kept them from burning up. They had parachutes that slowed them down some more. They also had airbags around them to make their landings softer. They bounced more than 20 times when they landed!

After they stopped bouncing they let the air out of their airbags. Then they unfolded themselves. Each rover spread out its solar panels and unfolded its wheels. Engineers on Earth tested each rover to make sure they were OK. Then the rovers drove onto the surface of Mars. We think the rovers can last about 90 days on Mars. They are exploring during the daytime and "resting" at night. After a while the solar panels will stop making enough electricity to keep the rovers going. We hope to learn a lot from them before that happens!